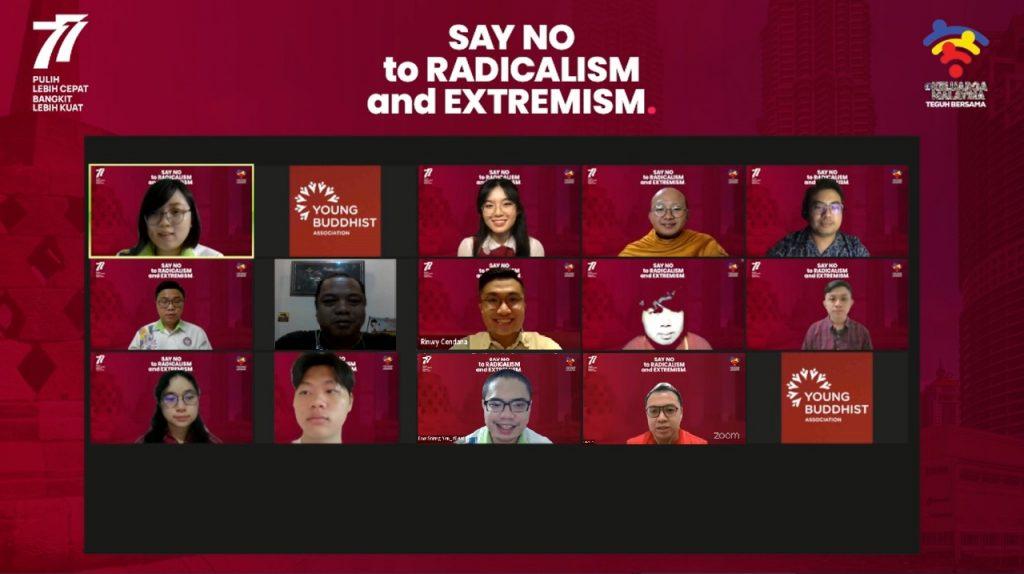 Held in celebration of the 77th Indonesian Independence Day, which was observed on 17 August, the forum, titled “Say No to Radicalism and Extremism,” was attended by notable humanitarian activists, as well as Islamic and Buddhist community leaders and Buddhist monastics from Indonesia and Malaysia. Each of the partcipants gave talks addressing the issue of building harmony and tolerance between religious communities in the neighboring countries.

In their opening remarks, the director of Buddhist Affairs and Education at Indonesia’s Ministry of Religion, Dr. Supriyadi, and the chairman of the Young Buddhist Association Indonesia, Gondo Wibowo Tantri, expressed their appreciation to the organizers for hosting the interfaith dialogue.

Event coordinator Billy Lukito Joeswanto of the Young Buddhist Association of Indonesia noted that the online forum was intended as a platform for Buddhists and Muslims from two allied nations to exchange ideas and develop paths for action to counter the growing social crisis of extremism and radicalism.

“Radicalism and extremism can be blocked by the existence of good and tolerant people, starting with action at the community level,” Billy shared with BDG. “If we are silent and ignore this growing crisis in our societies, then radical and extremist elements will take control. The Young Buddhist Association applies the teachings of the Buddha, also known as the Dhamma, to their vision and mission to prevent radicalism and extremism from flourishing.”

Islamic humanitarian activist and interfaith and cultural dialogue advocate Wawan Gunawan, stated that radicalism arises from the way people conduct their religious ands spiritual lives. He added that extremism is a symptom that can be found at several layers of society, and is a compound of individual, religious, and political perspectives.

“In the contemporary world of social media, filters are urgently needed—from self, to social, and political,” Wawan explained. “Government policies in the area of religion also play an important role in creating a tolerant society that can extinguish radicalism.

“The tolerance that the people of Indonesia and Malaysia aspire to is not only about respect for differences, but must also serves to emphasize and acknowledge differences in order to bring about cooperation and to encourage each other in positive ways.

“For example, the function of Pancasila* in Indonesia is applied by all religions. It is not part of religion, but accommodates all religions and becomes a common point of intersection. It is important for us as a society to be aware of Pancasila and Bhinneka Tunggal Ika**.”

These words were echoed by Indonesian Buddhist monk Bhante Dhirapunno, who noted the dangers of radicalism and emotional extremism on social media, and emphasized the need for awareness and recognition of the underlying patterns to avoid creating harm and suffering and to avoid eroding tolerance in social groups and communities.

“We need to reflect on the love and compassion that is taught by all religions so that we do not harm others or ourselves,” Bhante Dhirapunno stressed. “Take care of your thoughts, watch your words, keep your eyes, and watch what your fingers write on social media. By living life thus, wherever we go we leave traces of goodness and truth. Mindfulness is a process of practice. The struggle for tolerance is a never-ending journey because there will always be those who are intolerant, yet there are also people like us who will always struggle in support of tolerance.” 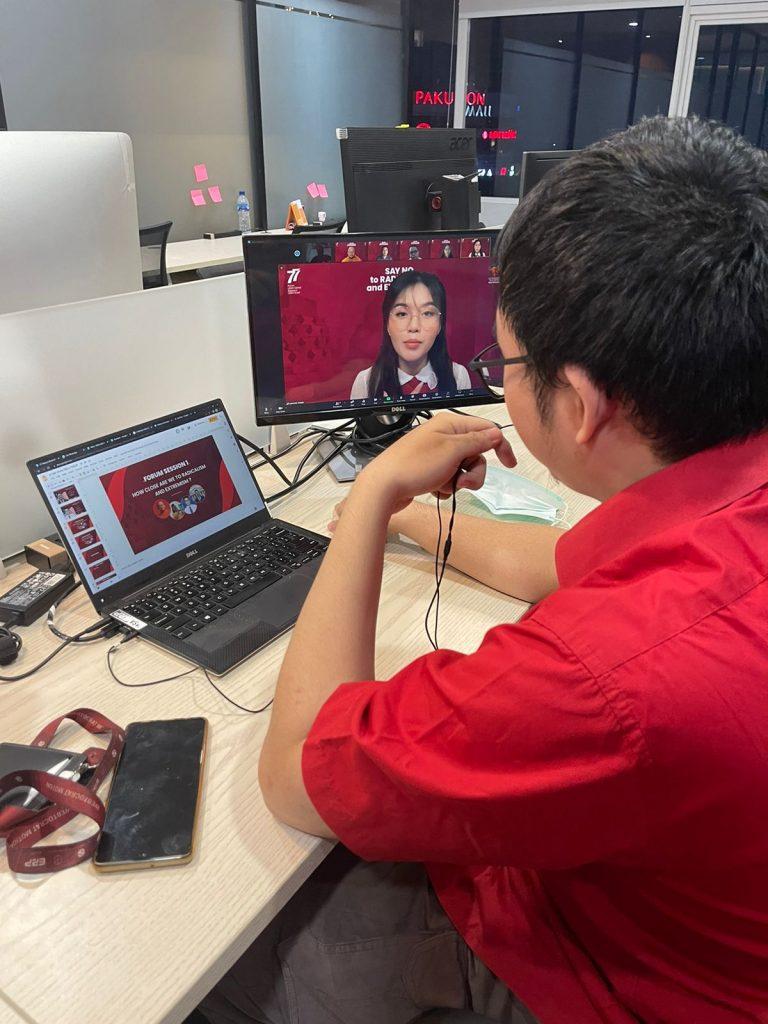 The general secretary of the Young Buddhist Association of Malaysia, Eow Shiang Yen, observed that religious freedom brings blessings to society as a whole. He urged the promotion of greater mutual understanding and better relations regarding differences and also ways to manage them.

“We need to have a uniquely deep experience of cooperation between Indonesia and Malaysia, to combine solutions for many races and religions to prevent radicalism and violent extremism,” he said. “As the Buddha stated: the Middle Way is the best solution to this problem. Not too extreme and not too passive is the way for dealing with extremism and radicalism.”

Another speaker from Malaysia, Aizat Shamsuddin, founder and director of the Universal Muslim Community (KMU Malaysia), spoke about the role that ideological extremism plays in the radicalizing society, and how extremist groups use social media to spread messages and ideas of hatred and violence.

“To overcome this problem, we need to increase our social media presence because that is a major source of information. We all have a role to play in our own communities. We must try our best to promote positivity, peace, compassion, and kindness,” said Aizat.

He also explained that schools need to offer a more holistic and integrated system of education, along with the cultivation of good relations between religions and ethnicities.

“We need to nurture cultural exchange to strengthen relations and the exchange of knowledge in various areas. Each of us from Indonesia and Malaysia can learn from others in order to avert the dangers of radicalism and extremism.” 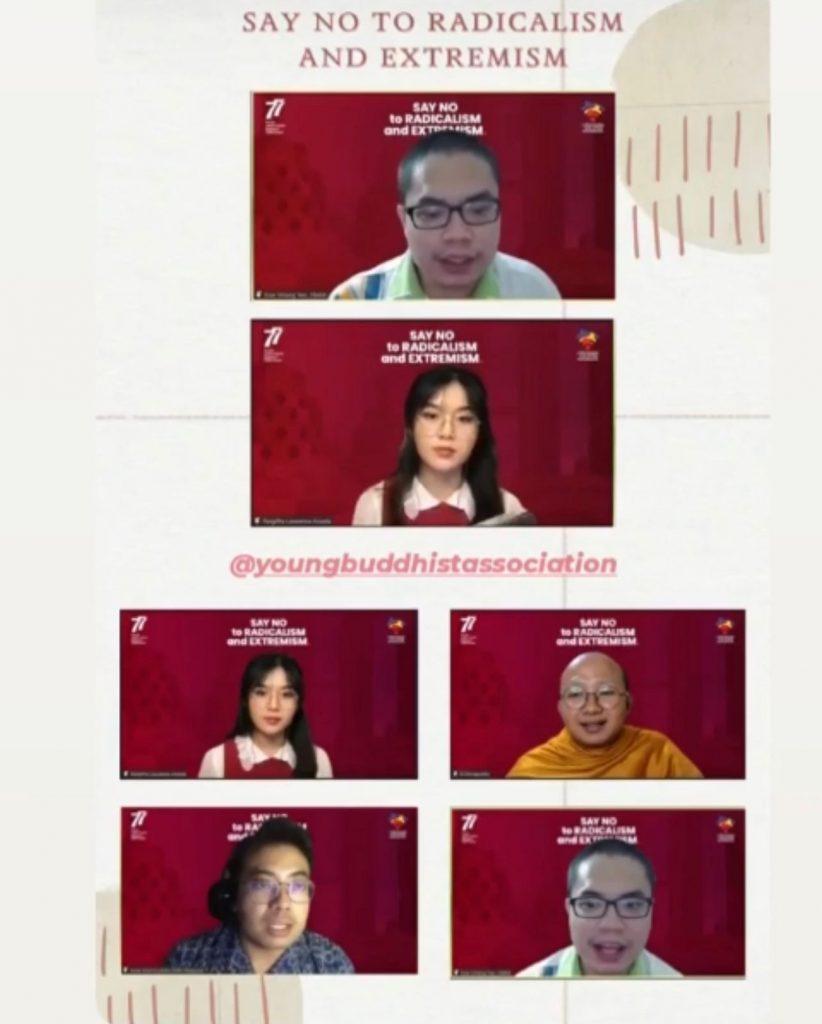 The Young Buddhist Association of Indonesia is the leading Buddhist youth organization in Indonesia. Through a conviction in the Buddha’s mission of compassion, growth, and liberation, the association promotes a positive lifestyle to develop a society founded on wisdom, compassion, and gratitude. The association is involved in establishing Buddhist organizations nationwide, propagating the study of the Dharma among young people, and providing leadership training.

* Pancasila is the official Indonesian state philosophy. It is composed of five principles: Belief in God; A just and civilized society; National unity; Democracy guided by inner wisdom in the unanimity of deliberations among representatives; and social justice for all people.

** The official national motto of Indonesia, which translates as “Unity in Diversity.”