US returns looted relics of 'extraordinary cultural value' to Cambodia

New York officials have returned 30 cultural artifacts to Cambodia, including a 10th-century Khmer sculptural "masterpiece," after the items were illegally sold to private collectors and a US museum. 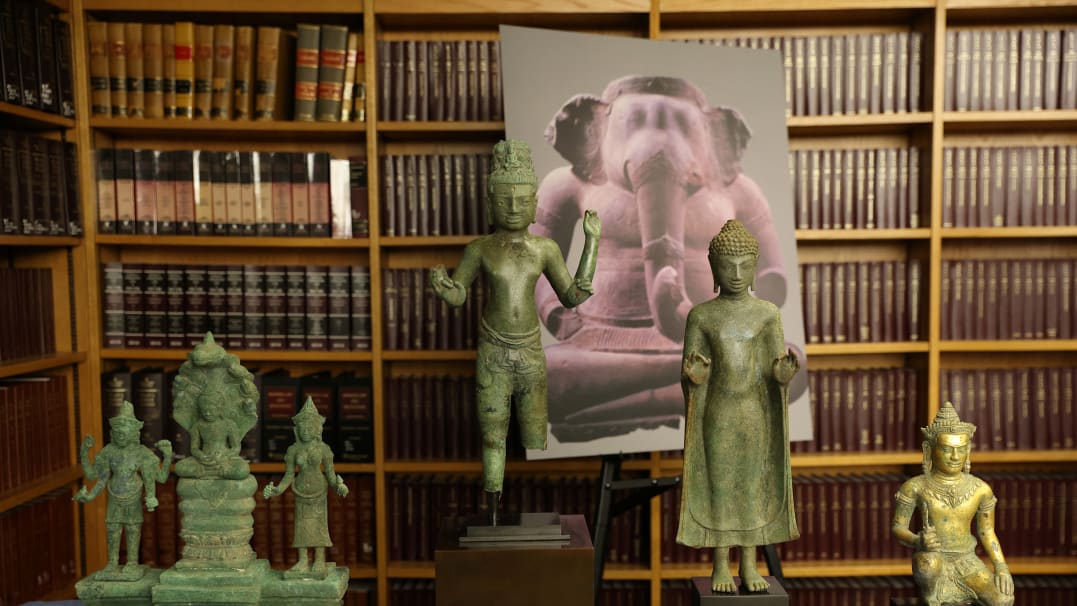 The antiquities, which had been taken from temples and archeological sites during periods of civil conflict in the country, entered the international art market via an "organized looting network," according to the US Department of Justice.

On Monday, the US Attorney's Office for the Southern District of New York hosted a repatriation ceremony for the works, with Cambodia's ambassador to the US, Keo Chhea, in attendance. 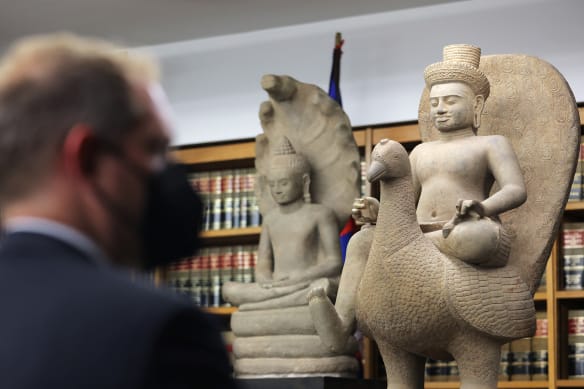 The 10th-century sandstone statue "Skanda on a Peacock" was among 30 items returned to Cambodia. Credit: Andrew Kelly/Reuters

"These statues and artifacts, which range in age from the bronze age to the 12th century, are of extraordinary cultural value to the Cambodian people and we are delighted to be sending them home today," said prosecutor Damian Williams during a press conference.

The artifacts include "Skanda on a Peacock," a 10th-century sandstone sculpture of the Hindu war deity Skanda, which was stolen from the Prasat Krachap temple at Koh Ker, an archeological site, in the 1990s.

Also among the returned items was a three-ton sculpture of the Hindu elephant god Ganesha -- a statue listed among the Antiquities Coalition's 10 "most-wanted" looted artifacts -- as well as a 6th- or 7th-century bronze Buddha. 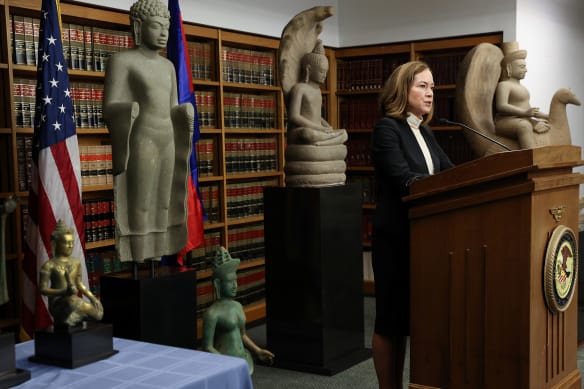 Assistant Secretary of State for Educational and Cultural Affairs, Lee Satterfield, pictured alongside some of the looted artifacts at Monday's repatriation ceremony. Credit: Andrew Kelly/Reuters

The retrieval of these items, most of which were voluntarily returned by a private collector, is part of an ongoing investigation into Southeast Asian artifacts bought and sold by the late antiquities dealer, Douglas Latchford. Once considered a leading scholar of Khmer art, Latchford was accused by US prosecutors of trafficking artifacts and deceiving clients, from private collectors to major institutions.

"For years, Douglas Latchford operated an illegitimate enterprise by smuggling looted antiquities into the United States with blatant disregard for US Customs laws," said Ricky J. Patel, a special agent at Homeland Security Investigations, in a statement in January. "Latchford facilitated this by falsifying customs documentation and providing deceptive paperwork to collectors for sale on the international art market."

In 2014, a 10th-century statue linked to Latchford was withdrawn from an auction and returned to Cambodia after investigators concluded it had been illegally removed from a temple during the country's civil war. Five years later, US prosecutors charged Latchford with wire fraud and smuggling but he died in Thailand in 2020 before answering the charges. 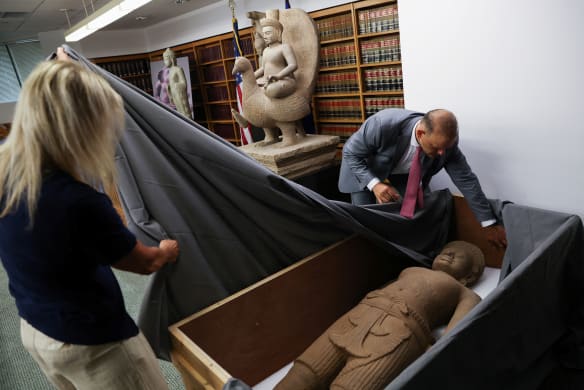 At Monday's repatriation ceremony, ambassador Chhea told Reuters that the antiquities will be displayed at the National Museum of Cambodia in the capital city Phnom Penh.

Speaking to reporters at the press conference, he said: "We need to commit and to continue our fight to protect our soul of cultural heritage and prevent the priceless antiquities from being further plundered, looted and spirited away from the country."

"We know that this problem goes much further, much deeper than the activity of one man," Chhea added. "It is a global problem that involves wealthy collectors, private dealers, gallery owners and even some of the world's most prestigious places."