Speaking to government authorities in Canada, including Prime Minister Justin Trudeau, Pope Francis criticized the “colonialist mentality” that oppressed Indigenous peoples in the past and continues today, while apologizing once more for the role played by the Catholic Church. 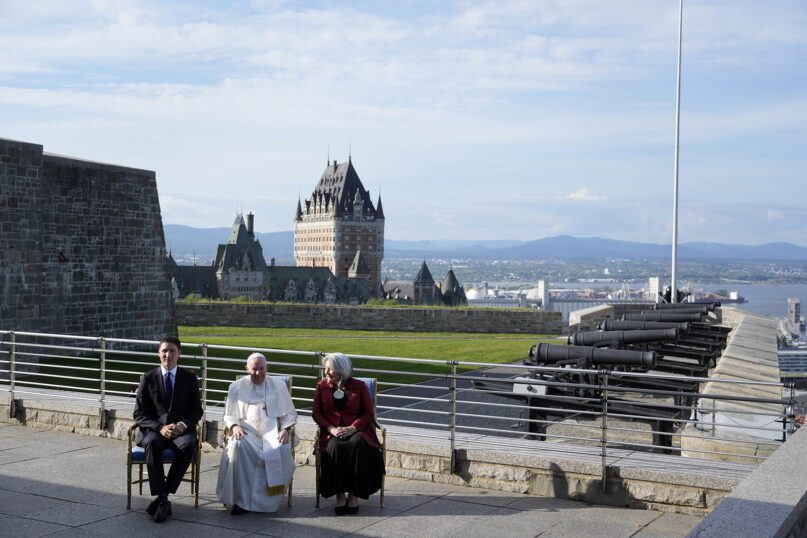 Pope Francis is flanked by Canadian Prime Minister Justin Trudeau, left, and Governor-General Mary Simon, right, at the Citadelle de Quebec, July 27, 2022. Francis is on a “penitential” visit to Canada to beg forgiveness from survivors of the country’s residential schools, where Catholic missionaries contributed to the “cultural genocide” of generations of Indigenous children by trying to stamp out their languages, cultures and traditions. (AP Photo/Gregorio Borgia)

“In the past, the colonialist mentality disregarded the concrete life of people and imposed certain predetermined cultural models,” the pope said Wednesday (July 27) during a speech in the Citadelle of Quebec, the military seat of both Canada’s governor general and monarch.

“Yet today too, there are any number of forms of ideological colonization that clash with the reality of life, stifle the natural attachment of peoples to their values and attempt to uproot their traditions, history and religious ties,” he added.

Francis’ remarks were made on the third day of his apostolic visit to Canada (July 24-29), which he has described as a “penitential pilgrimage” to the lands of the First Nations, Metis and Inuit communities that have suffered marginalization and historically had their cultures repressed at the hands of the government and church authorities.

Canada’s Truth and Reconciliation Commission in its 2015 report asked Pope Francis to visit the country and personally apologize to Indigenous peoples for the Catholic Church’s role in the residential schools where many Indigenous children were taken with the aim of assimilation. Trudeau repeated the appeal in 2017.

On Wednesday, the pope praised the “vital teachings” of Indigenous peoples, especially their relationship with the environment and their attachment to their families. He once again condemned the “deplorable system” of residential schools, many of them Catholic-run, which often forcibly separated Indigenous children from their families, culture, language and traditions.

Echoing the apology he made on Monday for the church’s involvement in policies aimed at eradicating Indigenous culture, Francis expressed his “deep shame and sorrow” and renewed his “request for forgiveness for the wrong done by so many Christians to the Indigenous peoples.”

In a response to the pope’s speech, Trudeau expressed gratitude for the pope’s visit and apologies — and affirmed that more needed to be done.

“On Monday morning, I sat with survivors and felt their reactions to your apology. Each will take from it what they need. But there’s no doubt that you had an enormous impact. Survivors and their descendants need to be at the center of everything we do together going forward,” the prime minister said. 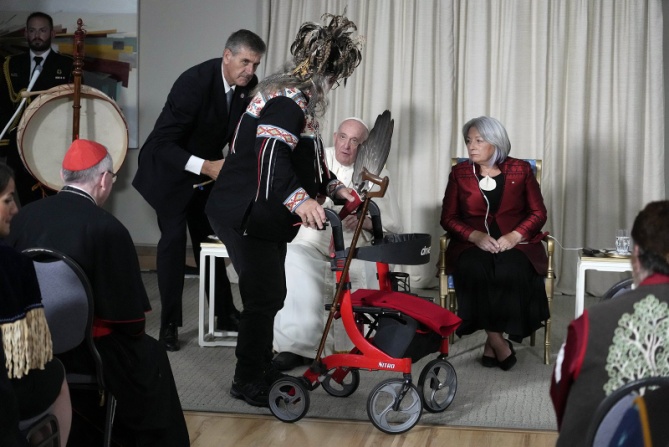 Pope Francis is greeted by a member of the Indigenous community, at the Citadelle de Quebec, July 27, 2022. Francis is on a “penitential” visit to Canada to beg forgiveness from survivors of the country’s residential schools, where Catholic missionaries contributed to the “cultural genocide” of generations of Indigenous children by trying to stamp out their languages, cultures and traditions. (AP Photo/Gregorio Borgia)

The pope also insisted in his speech that new forms of colonization continue today, calling it a force that “levels everything out, makes everything equal, proves intolerant of differences and concentrates on the present moment, on the needs and rights of individuals.”

This form of “ideological colonization” is a concept the pope has often decried and describes as the practice of wealthier states to leverage financial support for developing countries and communities in exchange for acceptance of Western values. Such efforts can lead to “the cancel culture that would judge the past purely on the basis of certain contemporary categories,” he said.

This mentality also tends to marginalize further the weak and vulnerable, he added, especially “the poor, migrants, the elderly and the unborn,” who are often “cast aside like dry leaves to be burnt.” Indigenous culture, Francis continued, has “much to teach us about care and protection for the family.”

The pope’s denunciation of what he sees as contemporary forms of colonization has been a refrain of his pontificate and draws from Francis’ experience in his native country of Argentina, where he denounced efforts by the International Monetary Fund to provide finances for education on the condition that gender identity be taught in schools.

He called on government authorities to “promote the legitimate rights of the native populations,” especially with regard to healing and reconciliation. The pope also reinforced the commitment of the church to “to understanding and healing” its relationship with Indigenous peoples.

Francis spoke of the “scandalous” reality that the economic development in the country is weighted so unjustly against Indigenous groups. “It is indeed sad that precisely among the native peoples we often find many indices of poverty, along with other negative indicators, such as the low percentage of schooling, and less than easy access to owning a home and to health care,” he said.

Indigenous people in Canada have suffered from a lack of adequate health care, including access to mental health programs, which was aggravated by the COVID-19 pandemic. Suicide and addiction rates among Indigenous communities are alarmingly high. Many living on reserves, including children, disproportionately suffer from malnutrition and chronic diseases.

Mary May Simon, the first Indigenous governor general of Canada, underlined the need to support Indigenous peoples “in terms of mental health resources” and releasing state and church records to former residential school students so they may “discover the true fate of those who never made it home.” She also stated the need to care “for Indigenous peoples who need the time and space to process what this visit means to them, and what the next steps should be.”

Pope Francis praised “Canada’s ecological vocation” and spoke about the need for peoples and nations to come together to address the global challenges of war, climate change, migration and the pandemic. “Politics cannot remain imprisoned in partisan interests,” he said. “We need to be able to look, as the Indigenous wisdom tradition teaches, seven generations ahead, and not to our immediate convenience, to the next elections, or the support of this or that lobby.”

The pope also congratulated Canada on its welcoming of Ukrainian and Afghan refugees and encouraged its efforts to embrace its multicultural society while respecting its “diverse traditions and cultures.”