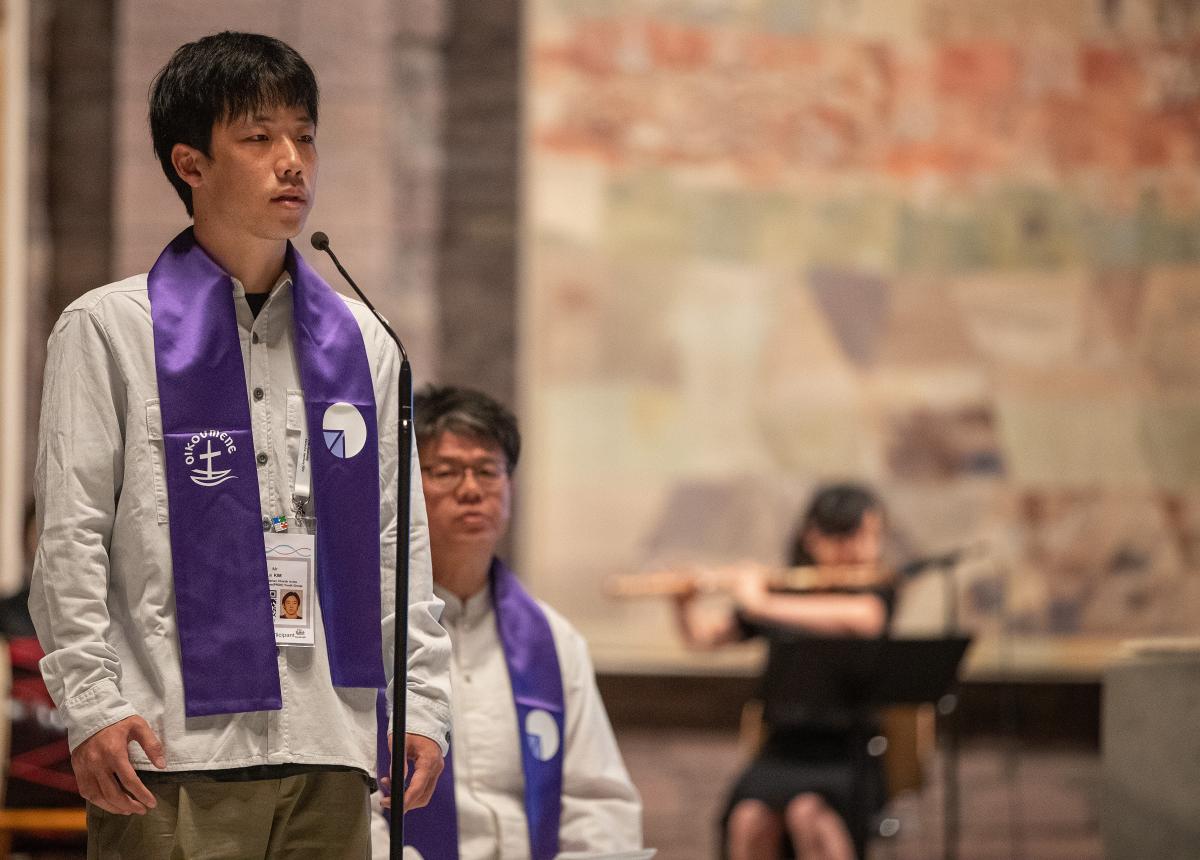 Junghyun Kim sings during a Monday prayer for peace and reunification between South and North Korea at St. Stephan Church in Karlsruhe as part of the World Council of Churches' 11th Assembly. Kim is a member of the youth group from the Presbyterian Church in the Republic of Korea. The assembly took place from August 31 to September 8 under the theme "Christ's Love Moves the World to Reconciliation and Unity." Photo: Mike DuBose/WCC

The statement opens with the observation that 2023 has dawned in the midst of a nuclear war crisis on the Korean Peninsula. “The trilateral military cooperation between South Korea, the U.S. and Japan is strengthened in the new Cold War international order,” the English translation of the statement reads. “In response to this cooperation, North Korea’s military provocations have continued to denounce the South Korea-US-Japan military cooperation.”

The message urges the South and North Korean authorities to immediately stop the tactics escalating the threat of nuclear war on the Korean Peninsula.

“Even after the failure of the 2019 North Korea-United States Hanoi Summit, South and North Korea have made efforts to maintain peace on the Korean Peninsula while minimizing military tensions,” reads the text. “In this current crisis, we demand that the two Koreas seek a peaceful approach to restore mutual trust through dialogue and pursue common security and coexistence.”

2023 marks the 70th anniversary of the Armistice Agreement that brought about a cessation of hostilities in the Korean War. “However” observes WCC Director of International Affairs Peter Prove, “the war has never been officially ended. After 70 years, the lack of closure of that bloody and destructive historical conflict continues to frustrate efforts to address the current, very different, circumstances on the Peninsula.” WCC has long supported advocacy by the NCCK for a peace treaty to replace the Armistice Agreement, and to improve the political environment for dialogue between South and North Korea.

Underscoring the position expressed in the NCCK statement, WCC General Secretary Rev. Prof. Dr Jerry Pillay affirmed that “dialogue and negotiations offer the only viable path to resolving the current crisis on the Korean Peninsula and to achieving a sustainable peace in the region.”

As the NCCK statement says, “We should work toward the Korean Peninsula that feels the warm wind of peace blowing freely.”