Putting their words into practice, 35 faith institutions have announced their divestment from fossil fuel companies. 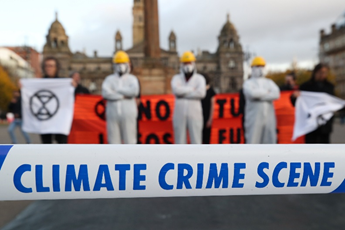 The Vatican welcomed the initiative, with Father Joshtrom Isaac Kureethadam, Coordinator of the Ecology Sector in the Vatican Dicastery for Integral Human Development, saying he applauded “these prophetic institutions divesting today and encourage every institution in the world to reduce our dependence on such harmful energy sources by divesting from fossil fuel.”

“If we want to achieve peace, and ensure a livable planet for all, including the future generations, we need to end our dependence on fossil fuels that fuel the current climate crisis,” he said.

Participating institutions include five Church of England dioceses; two Catholic dioceses in the UK; the Methodist church in Ireland; two United Reformed Church Synods; 11 Catholic religious orders, including the Congregation of the Sisters of St Joseph in Canada, the Religious Institute of the Sacred Heart of Mary in Brazil, and the Jesuits in the U.S. East Province; the Catholic Theological Society of America; two Jesuit universities in the U.S. (Marquette University and Loyola University, Chicago); and several local churches.

In 2020, the Vatican had urged Catholics to disinvest from the armaments and fossil fuel industries and to closely monitor companies in sectors such as mining to check if they are damaging the environment.

On the fifth anniversary of Laudato Si’, Pope Francis’s landmark ecological encyclical, the Holy See released a 225-page document titled Journey Towards Care for Our Common Home. It suggested practical steps to achieve the goals of the encyclical, which strongly supported agreements to slow global warming and warned against the dangers of climate change.

One action point of the manual called on Catholics to “shun companies that are harmful to human or social ecology, such as abortion and armaments, and to the environment, such as fossil fuels.”

In the statement announcing the initiative Tuesday, the 35 participants point out that the profits from fossil fuels are funding Russia’s brutal invasion of Ukraine, while it is estimated that the proposed East Africa Crude Oil Pipeline (EACOP) in Uganda and Tanzania will displace over 12,000 families. Catholic bishops have opposed the pipeline, saying that it will also make the biodiversity crisis “devastatingly worse.”

Dr. Svitlana Romanko, the coordinator of Stand With Ukraine Campaign, thanked those taking part in the initiative, saying that their decision is a “powerful step towards peace in Ukraine and towards phasing out fossil fuels globally while tackling the energy and climate crises.”

Romanko, an environmental lawyer, praised the religious institutions, saying that they are “way ahead of the world leaders who still allow billions for Russian oil and gas to flow into [Russian President Vladimir] Putin’s war machine.”

“We demand that governments speed up investments in renewable energy, stop funding fossil fuel expansion and put public money where it needs to be: in a peaceful, prosperous and clean energy future for all,” she said

A recent investigation by The Guardian newspaper revealed the world’s biggest fossil fuel firms are quietly planning scores of “carbon bomb” oil and gas projects that could lead to temperature rises over internationally agreed limits, with a catastrophic impact on the global environment.

“Each one of us must accept our personal and collective need to change and make sacrifices, recognizing the inherent issues of justice and fairness that are involved, and realizing, as Pope Francis says, that ‘the cry of the earth’ is especially ‘the cry of the poor’,” he added.

“From a faith point of view, God is calling us to be caring stewards of creation, to protect and nourish our planet and its resources, and not to selfishly waste them or ruthlessly and excessively exploit and destroy them,” the archbishop said, encouraging other institutions to consider similar action.