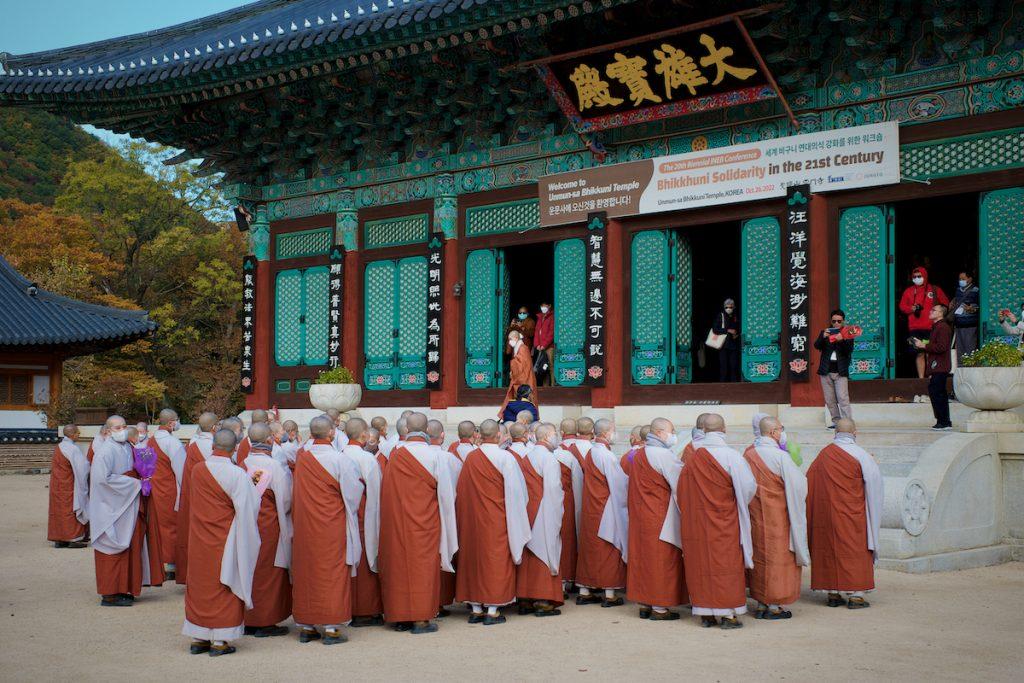 The conference’s opening panel, titled “Bhikkhuni Solidarity in the 21st Century,” focused on the vital role of fully ordained female monastics as an eternal part of Buddhism’s Fourfold Sangha, and examined the ongoing challenges and obstacles facing female monastics in Asia and around the world. The panel session’s theme was complemented by the carefully chosen venue, nestled in peaceful autumnal solitude in the southern reaches of the Taebaek Mountains.

Originally constructed in the kingdom of Silla in 560 CE, during Korea’s Three Kingdoms period (57 BCE–668 CE), Unmunsa (운문사) is a temple of the Jogye Order of Korean Buddhism. In 1950, Unmunsa became Korea’s first school for bikkhshuni ordination and is now the nation’s largest training center for fully ordained female monastics. Presently home to 270 resident female monastics, Unmunsa has produced more than 1,250 bikkhshunis. Today there are almost 8,000 bikkhshunis in South Korea.

The guest of honor for the occasion, INEB founder, academic, and renowned social activist Sulak Sivaraksa was accompanied by Ven. Pomnyun Sunim, the founder of Jungto Society and honorary adviser to INEB, on arrival at Unmunsa. There they were greeted by 93-year-old Ven. Myeongseong Sunim, who has led Unmunsa since 1970, and has been a key figure in re-establishing the bikkhshuni lineage in Korea and across Asia. 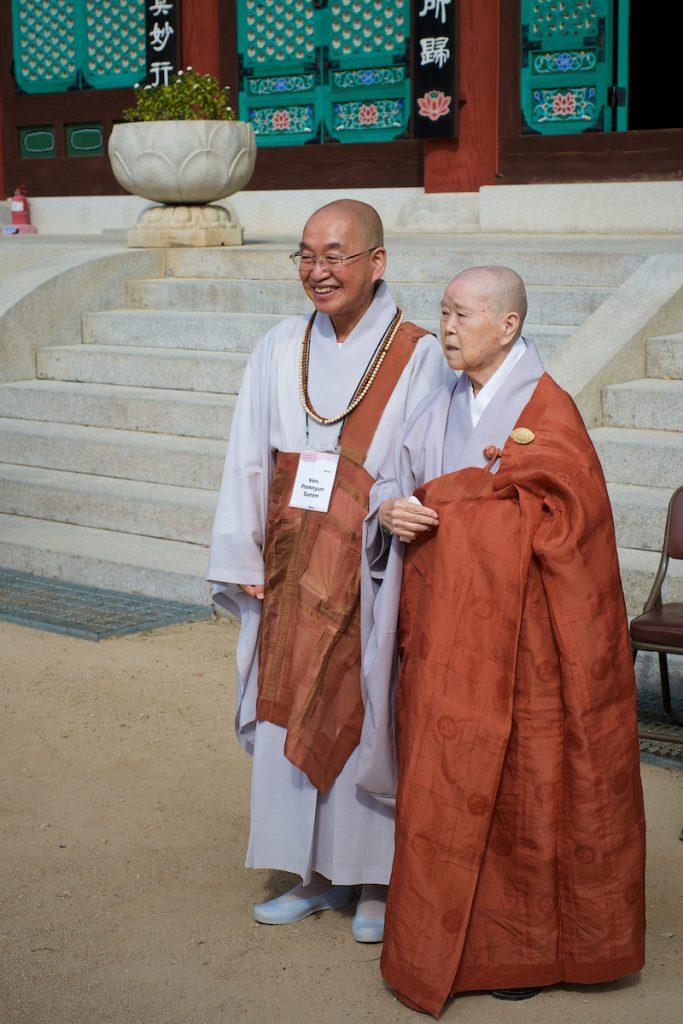 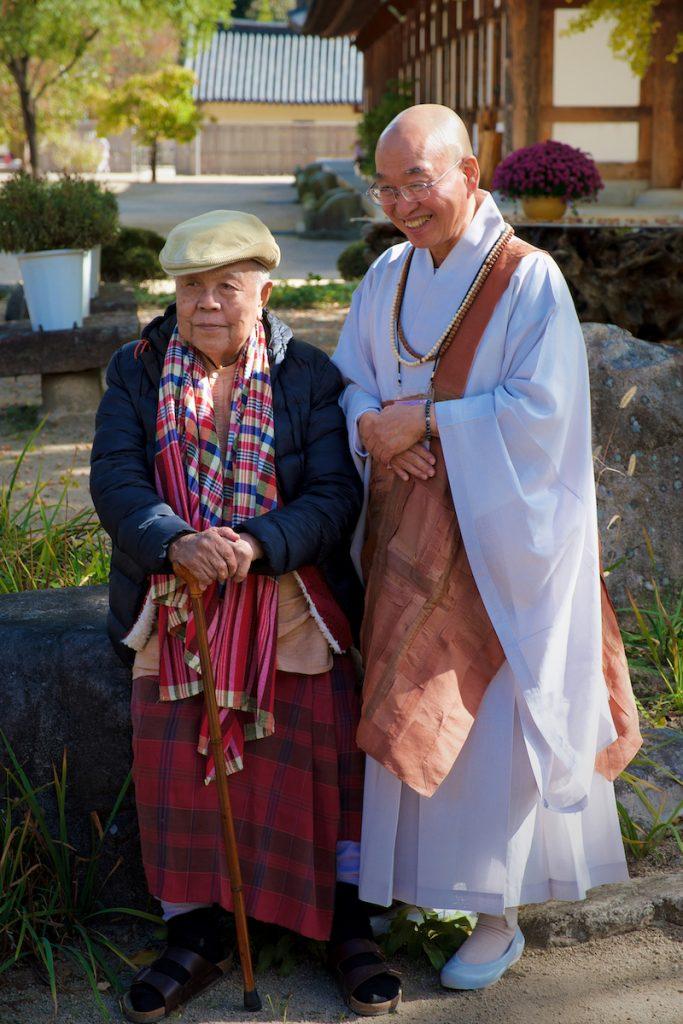 After an introduction by Ven. Pomnyun Sunim, “Bhikkhuni Solidarity in the 21st Century” commenced with a welcoming speech from Ven. UnSan Sunim, the abbess of Unmunsa, followed by a panel discussion featuring Ven. DongHo Sunim, a research freshman at the Sangha Graduate School of Unmunsa; Ven. Dhammakala Bhikkhuni, abbess of Thippayasathandhamma Bhikkhuni Arama in Songkhla, Thailand; and Dr. Tashi Zangmo, executive director of the Bhutan Nuns Foundation.

Ven. DongHo Sunim gave an in-depth talk on the development of the sutra school system and the bhikshuni sangha in South Korea since the 1950s, when a systematic path for educating and ordaining female monastics was established. She also outlined the educational philosophy and growth of Unmun Sangha Graduate School, and the present-day challenges for bhikshuni sangha education.

Ven. Dhammakala Bhikkhuni offered lively insights into the obstacles facing female renunciates in Thailand, a predominantly Theravada Buddhist country, with 94.5 per cent of the nation’s population of 69 million identifying as Buddhists. While the Southeast Asian kingdom is home to some 40,000 Buddhist temples and almost 300,000 monks, the government and monastic authorities have never officially recognized the full ordination of women, and the 280 fully ordained bhikkhunis that do exist do not generally enjoy the same level of societal acceptance as their male counterparts.

Dr. Tashi Zangmo, who recently organized a historic ordination ceremony for 142 female monastics in the Buddhist Kingdom of Bhutan,* gave a breakdown of the Buddhist heritage of female ordination since the time of Shakyamuni Buddha, its spread from India, and how the lineage was broken before reaching Vajrayana societies in the Himalayan region. Dr. Zangmo also examined some of the issues and controversies surrounding female ordination in the face of contemporary Buddhist orthodoxy, and the circumstances of Buddhist nuns in Bhutan today.

The 20th Biennial INEB Conference continued with a formal opening ceremony on Thursday. 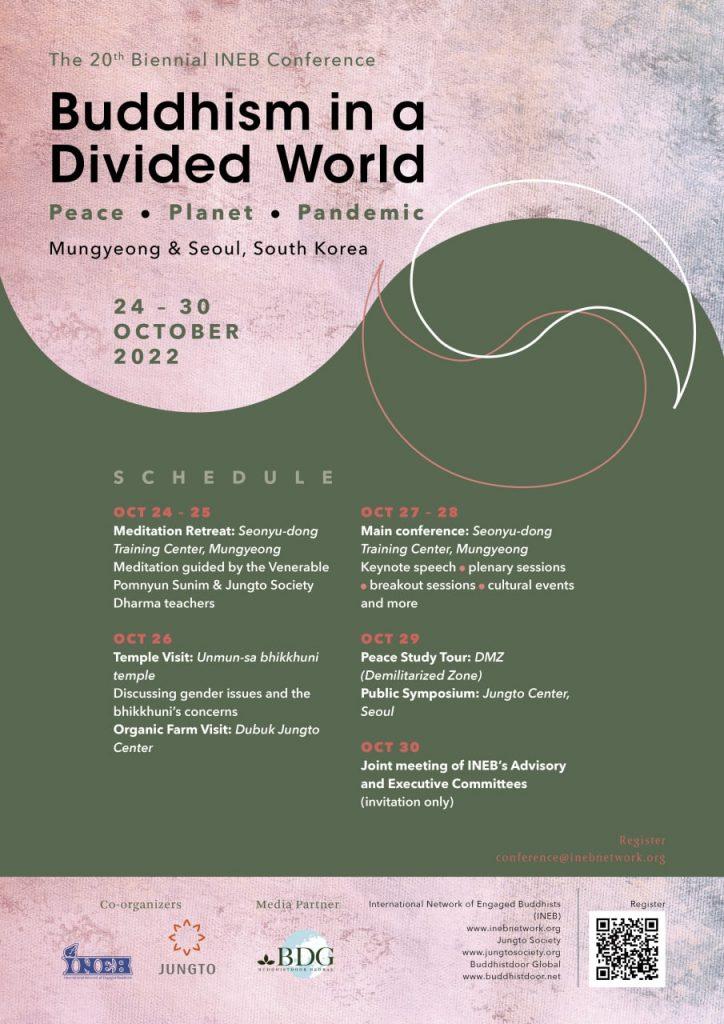 Running from 26–30 October in South Korea, the conference is the first official in-person gathering since INEB’s previous international conference in 2019. Focused on the theme “Buddhism in a Divided World,” the conference is aimed at developing INEB’s 10-Year Strategic Roadmap launched in 2017 and expanding outreach to like-minded social movements. This will help INEB to more fully support initiatives in social justice, cultural and gender equality and identity, inclusivity and diversity, transformative learning, and harmonizing initiatives associated with ecology and economics, intra- and inter-faith dialogue, and empowering young people.

The International Network of Engaged Buddhists (INEB) was formed in 1989 by the prominent Thai academic, activist, and social critic Sulak Sivaraksa and a group of Buddhist and non-Buddhist thought leaders. Connecting socially engaged Buddhists around the world, INEB works promote understanding, cooperation, and networking among inter-Buddhist and inter-religious groups, and to actively address urgent global issues such as human rights, conflict resolution, and environmental crises. Headquartered in Bangkok, INEB has established a wide range of social projects and outreach programs aimed at overcoming suffering and empowering vulnerable communities through the practice of the Dharma and engaged Buddhism.