The religious makeup of the new Congress bucks the trends seen in American religious life, a new report finds. 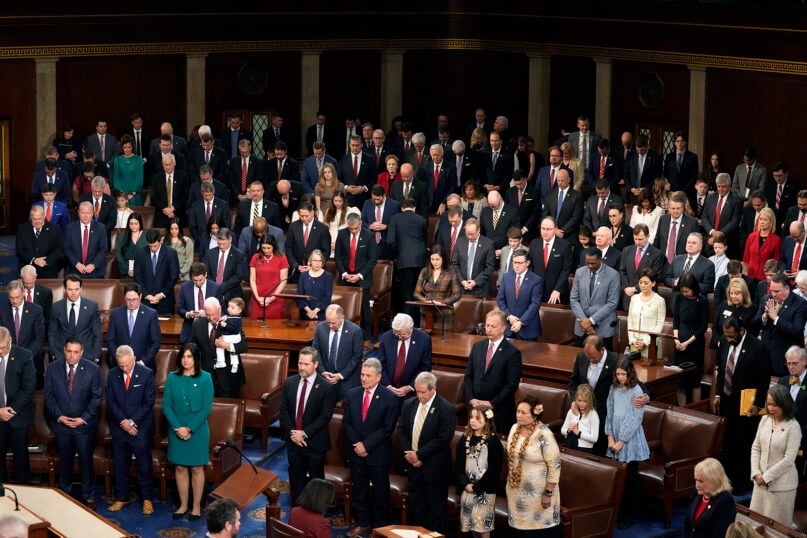 House members stand with their families as a prayer is read in the House chamber on the opening day of the 118th Congress at the U.S. Capitol, Jan. 3, 2023, in Washington.(AP Photo/Alex Brandon)

The Pew Research Center says the Senate and House members are “largely untouched” by the continuing decrease in the portion of Americans who identify as Christian and the comparable increase in the share of those who say they do not have a religious affiliation.

Christians comprise 88% of the voting members of the 118th Congress who are expected to be sworn in this week (week of Jan. 3), a number that has not changed much since the 1970s, when 91% of members said they were affiliated with that faith.

The American population, on the other hand, has seen a drop in those identifying as Christians, from 78% in 2007 to 63% currently. Close to 3 in 10 Americans (29%) say they are religiously unaffiliated — atheist, agnostic or “nothing in particular” — a far larger portion than 16% in 2007.

Sen. Kyrsten Sinema, an independent from Arizona, remains the only member of the new Congress who uses the description of religiously unaffiliated. Rep. Jared Huffman, D-Calif., described himself as humanist. Huffman also said he was “the token humanist in Congress” when he spoke via videotaped remarks to the Freedom From Religion Foundation’s annual convention in October. 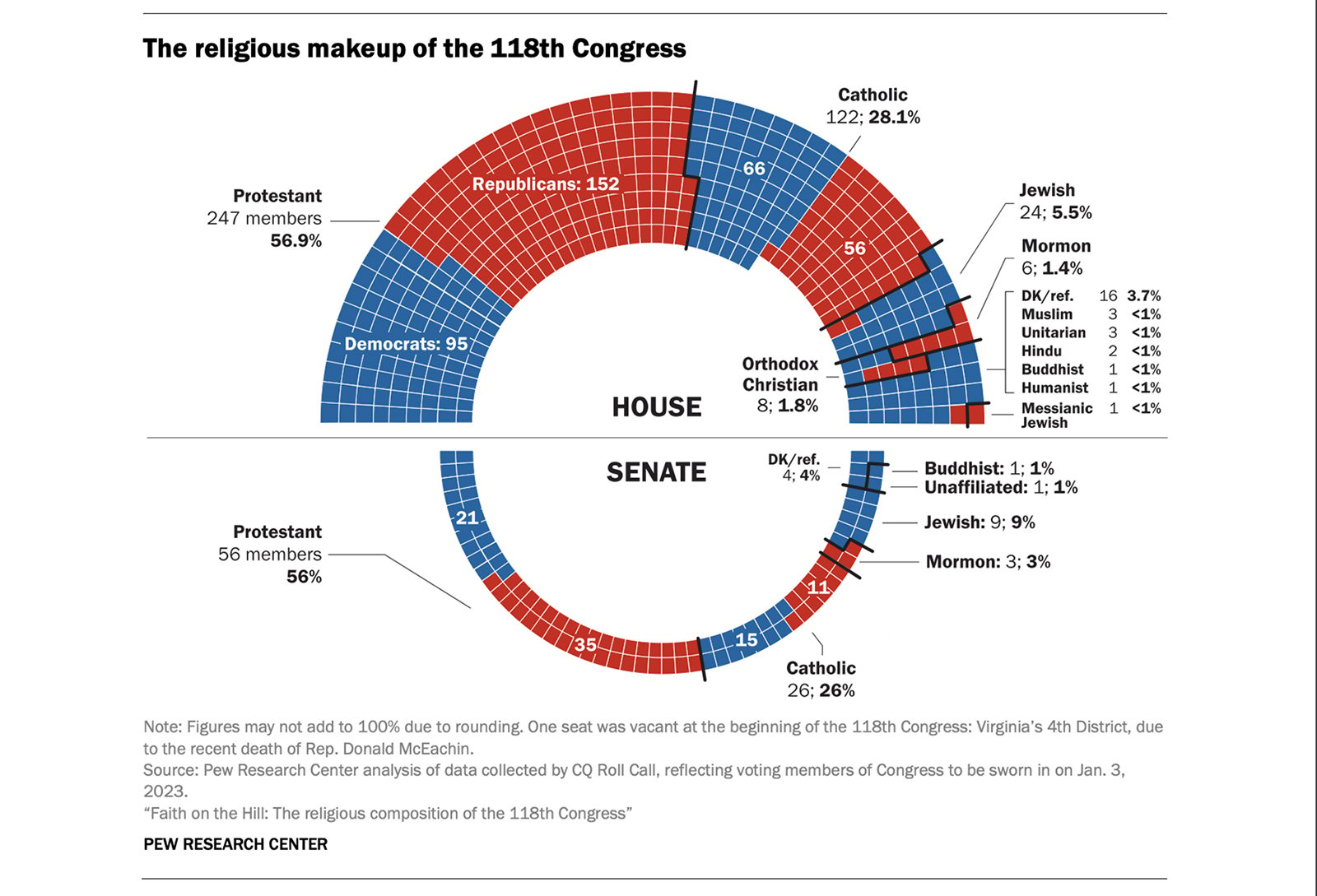 Another 20 members are listed as having no known religious affiliations. Most of them declined to state an affiliation when asked by CQ Roll Call, whose data is the primary source of analysis for the Pew biennial report. The “Faith on the Hill” report noted that Rep. George Santos, R-N.Y., was “moved to this category following revelations that he misrepresented parts of his life story and resume during his 2022 midterm campaign.” 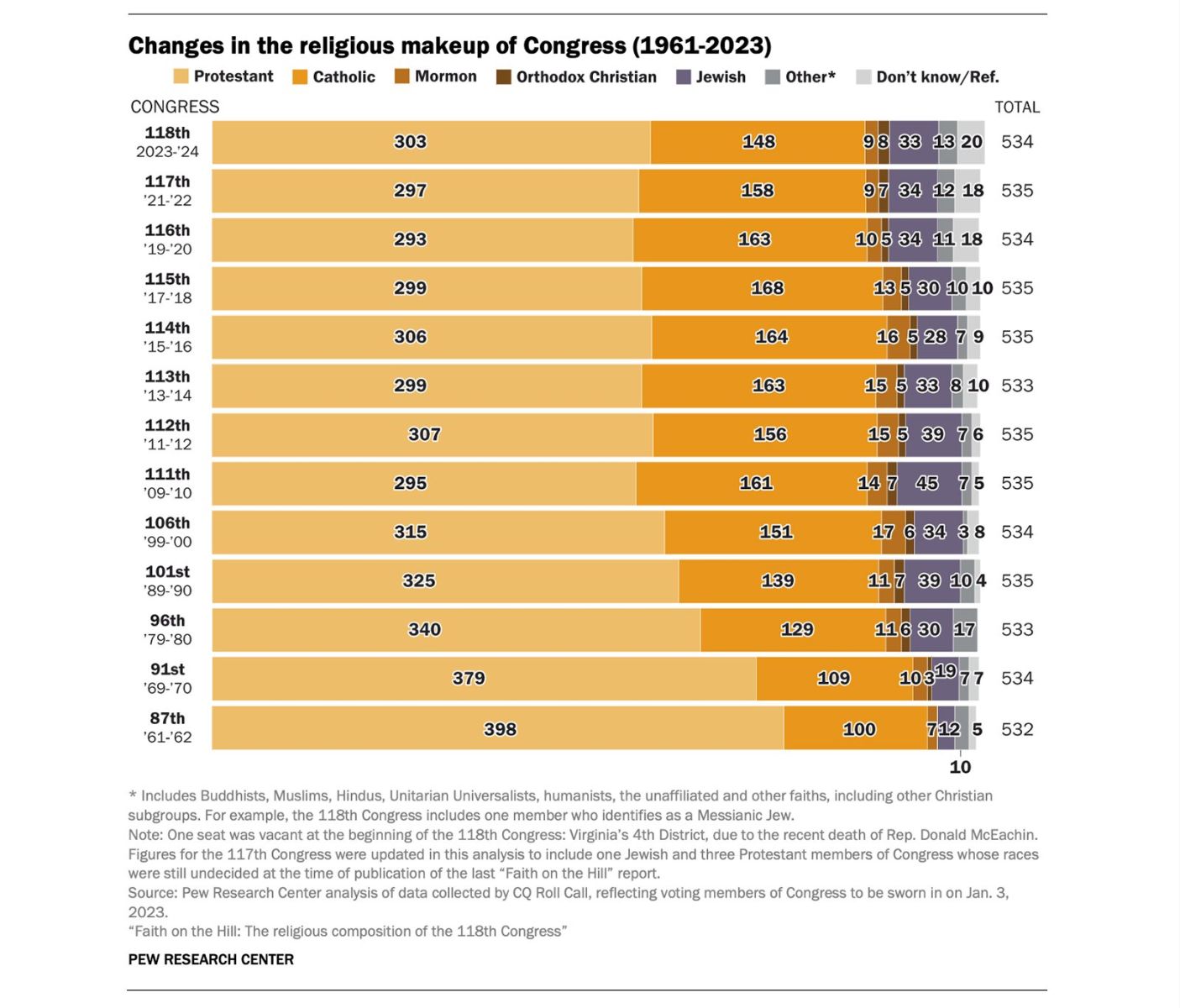 Overall, the 118th Congress looks similar to the previous body when comparing the two religiously.

Of the 534 total congressional members, 303 Protestants are being sworn in for the 2023-24 session, compared to 297 in the one that just ended. The number of Baptists remained the same - at 67 - while the number of Methodists and Episcopalians dropped by four each; Presbyterians had one fewer member. Catholics saw a drop of 10, with a new total of 148, but still comprise a greater share of Congress (28%) than they do the overall U.S. population (21%).

The members of Congress aligned with The Church of Jesus Christ of Latter-day Saints, or Mormon church, remained unchanged: nine. And the number of Orthodox Christians increased by one to eight. Rep. Anna Paulina Luna, R-Fla., is the sole member of the new Congress who identifies herself as Messianic Jewish; she has also described herself as a Christian.

The number of Jews decreased by one to 33 members and all three Muslims and two Hindus were reelected in the House as well as all three members who identify as Unitarian Universalist.

Here are some of the other findings related to Congress’ religious makeup:

Both chambers are dominated by Christians numerically.

All nine members of Congress who are Mormons are Republicans while Orthodox Christians are evenly split, with four from each major political party.

Almost two-thirds (64%) of newcomers to Congress are Protestant; a bit more than half (55%) of incumbents identify with that branch of Christianity.

There are fewer Catholic first-timers than returning members of Congress (22% compared with 29%).