BETHLEHEM, West Bank (AP) — Business is bouncing back in Bethlehem after two years in the doldrums during the coronavirus pandemic, lifting spirits in the traditional birthplace of Jesus ahead of the Christmas holiday. 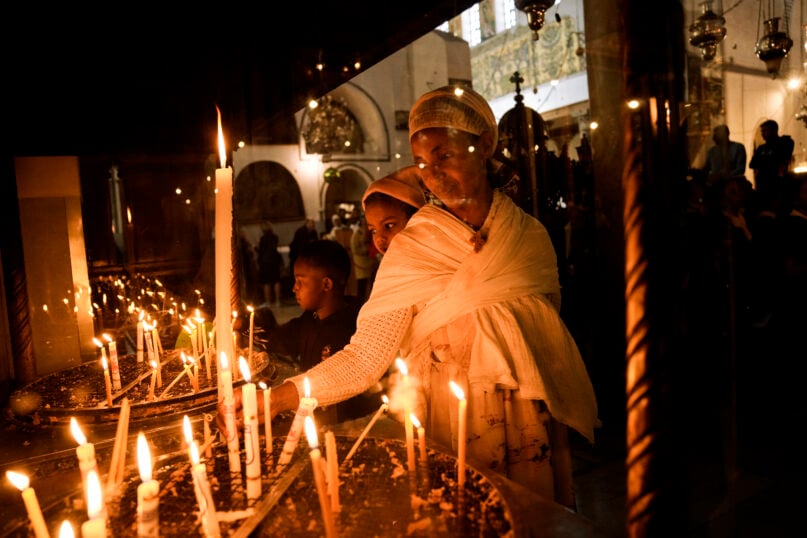 An Ethiopian woman and her child visit the Church of the Nativity, traditionally believed to be the birthplace of Jesus Christ, in the West Bank town of Bethlehem, Saturday, Dec. 3, 2022. Business in Bethlehem is looking up this Christmas as the traditional birthplace of Jesus recovers from a two-year downturn during the coronavirus pandemic. Streets are already bustling with visitors, stores and hotels are fully booked and a recent jump in Israeli-Palestinian fighting appears to be having little effect on the vital tourism industry. (AP Photo/ Mahmoud Illean)

Streets are bustling with tour groups. Hotels are fully booked, and months of deadly Israeli-Palestinian fighting appears to be having little effect on the vital tourism industry.

Elias Arja, head of the Bethlehem hotel association, said that tourists are hungry to visit the Holy Land’s religious sites after suffering through lockdowns and travel restrictions in recent years. He expects the rebound to continue into next year.

“We expect that 2023 will be booming and business will be excellent because the whole world, and Christian religious tourists especially, they all want to return to the Holy Land,” said Arja, who owns the Bethlehem Hotel.

On a recent day, dozens of groups from virtually every continent posed for selfies in front of the Church of the Nativity, built on the grotto where Christians believe Jesus was born. A giant Christmas tree sparkled in the adjacent Manger Square, and tourists packed into shops to buy olive wood crosses and other souvenirs.

Christmas is normally peak season for tourism in Bethlehem, located in the Israeli-occupied West Bank just a few miles southeast of Jerusalem. In pre-pandemic times, thousands of pilgrims and tourists from around the world came to celebrate.

But those numbers plummeted during the pandemic. Although tourism hasn’t fully recovered, the hordes of visitors are a welcome improvement and encouraging sign.

“The city became a city of ghosts,” said Saliba Nissan, standing next to a manger scene about 1.3 meters (4 feet) wide inside the Bethlehem New Store, the olive wood factory he co-owns with his brother. The shop was filled with Americans on a bus tour.

Since the Palestinians don’t have their own airport, most international visitors come via Israel. The Israeli Tourism Ministry is expecting some 120,000 Christian tourists during the week of Christmas.

That compares to its all-time high of about 150,000 visitors in 2019, but is far better than last year, when the country’s skies were closed to most international visitors. As it has done in the past, the ministry plans to offer special shuttle buses between Jerusalem and Bethlehem on Christmas Eve to help visitors go back and forth.

“God willing, we will go back this year to where things were before the coronavirus, and be even better,” said Bethlehem’s mayor, Hanna Hanania.

He said about 15,000 people attended the recent lighting of Bethlehem’s Christmas tree, and that international delegations, artists and singers are all expected to participate in celebrations this year.

“Recovery has begun significantly,” he said, though he said the recent violence, and Israel’s ongoing occupation of the West Bank, always have some influence on tourism.

Israel captured the West Bank in the 1967 Mideast war. The internationally recognized Palestinian Authority has limited autonomy in parts of the territory, including Bethlehem.

The Christmas season comes at the end of a bloody year in the Holy Land. Some 150 Palestinians and 31 Israelis have been killed in Israeli-Palestinian fighting in the West Bank and east Jerusalem this year, according to official figures, making 2022 the deadliest year since 2006. Israel says most of the Palestinians killed were militants, but stone-throwing youths and some people not involved in the violence have also been killed.

The fighting, largely concentrated in the northern West Bank, reached the Bethlehem area earlier this month, when the Israeli army killed a teenager in the nearby Deheishe refugee camp. Palestinians held a one-day strike across Bethlehem to protest the killing.

Residents, however, seem determined not to allow the fighting to put a damper on the Christmas cheer.

Bassem Giacaman, the third-generation owner of the Blessing Gift Shop, founded in 1925 by his grandfather, said the pandemic was far more devastating to his business than violence and political tensions.

Covered in sawdust from carving olive-wood figurines, jewelry and religious symbols, he said it will take him years to recover. He once had 10 people working for him. Today, he employs half that number, sometimes less, depending on demand.

“The political (situation) does affect, but nothing major,” Giacaman said. “We’ve had it for 60-70 years, and it goes on for a month, then it stops, and tourists come back again.”