In 2017, a Catholic church in the village of Afferden in the Netherlands was sold to Buddhist monastics from the Dhammakaya movement in Thailand and converted into a Buddhist temple. The sale followed a trend of closing Catholic churches in the country, but it is the first to be transferred to a Buddhist group. Today, the Buddhist and non-Buddhist communities of the area have found harmony.

While many mourn the decline of Catholic and other Christian practices in the Netherlands, others speak of commonalities in the spiritual traditions and note their gratitude that the building will not go to secular use as offices or apartments. Van Dinteren, interviewed by the Dutch newspaper, De Gelderlander, said that he often went to church and misses the weekly Masses. Yet he said he is happy with the newcomers. “The Buddhists are friendly people and already completely accepted by the villagers. I am happy that the church is still being used by people who have its best interest at heart,” he said. (Crux) 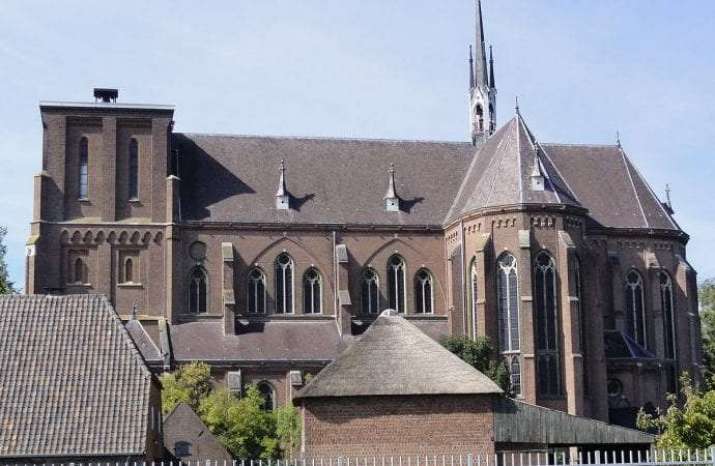 Several Catholic churches in the area have been closed, with just one church, in the nearby village of Druten, remaining open to serve parishioners. Ton Perlo, the vice president of the local parish board, oversaw the process of closures. Discussing the Dhammakaya movement’s wish to purchase the church in Afferden, he said that Dutch Catholic Church guidelines normally do not allow non-Catholics to purchase a church. However, after much consideration, the fact that the building would remain in the hands of a religious group helped convince him and others, “It remains a spiritual building. It’s better to have Buddhists in it than apartments,” he said. (Crux)

Venerable Sander Oudenampsen, a Dutch-speaking monk in the Dhammakaya movement, help secure the church for the Buddhists. “Originally, we were looking for a location in Amsterdam,” he said. “But it’s much quieter here. Ideal for meditation.” (Crux)

When asked about the Buddhist use of a Christian building, Ven. Oudenampsen continued: “They’re both focused on prayer, on meditation. That’s also what I hear from the people who visit the meditation evenings.” He added that many of the meditators he sees used to attend the church before the handover. Many of them visit him as they would have a Catholic priest in the past, asking him questions about life: “I think Buddhism can provide many answers to these questions.” (Crux) 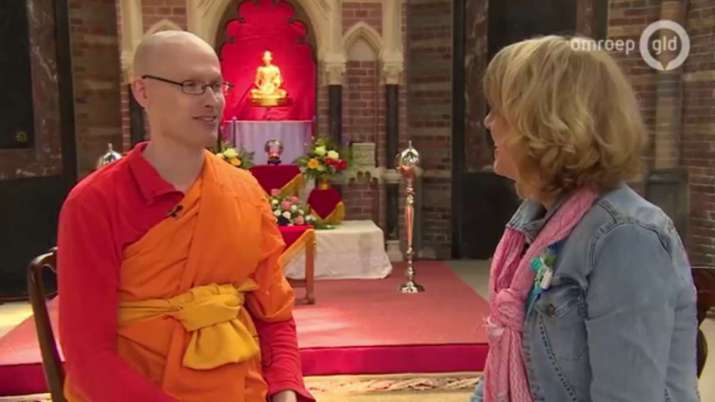 Sander Oudenampsen inside the new Wat Phra Dhammakaya Nederland in 2017. From youtube.com

Father Gerard van Hoofd, who served in the village before his retirement, said he was glad that the Buddhists have found a home in the church. “The Buddhists invest a huge amount of time and energy in the village, and put a lot of effort into being known and seen,” he said. (Crux)

Dhammakaya is a new Buddhist movement, established in 1916 in Thailand by a monk named Luang Phor Sodh. The movement took off in the early 1970s, around the same time that the Santi Asoke movement was founded in the same country. Dhammakaya is known for its simplified techniques of mantra and visualization meditation, as well enormous group meditation sessions and ceremonies. It has been criticized by intellectuals and others supporting traditional Theravada Buddhism for its focus on marketing and offering simplistic solutions to life’s problems. (Mackenzie 2007, 189) 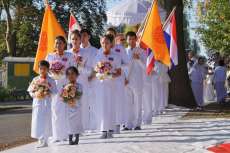 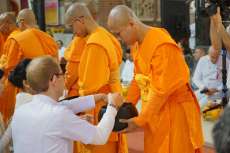 The Dhammakaya Netherlands Foundation was launched in 2014, “with the aim of making the practice of Buddhist teaching better known.” (Dhammakaya Nederland) As they seek to expand on the growing interest in mindfulness and meditation practices across society, they note the need to also help deal with problems of diversity in Dutch society and distrust between ethnic and religious groups.

The Netherlands was predominantly Christian until the late 20th century. Since then there has been a steady decline in both Catholic and Protestant church attendance. While the nation is historically Protestant, the decline in adherence there has been more marked, such that today Catholics, representing around 23.7 per cent of the population, outnumber Protestant sects, representing some 20.1 per cent in total, according to a 2015 government survey. Over half, 50.1 per cent, of the adult population is not religious. Islam comprises 4.9 per cent of the total population, Hinduism 0.6 per cent, Buddhism 0.4 per cent, and Judaism 0.1 per cent.