Religious groups with immigrant members grew fastest over past decade

A decennial study of U.S. religious life shows what many demographers and others have long known: Participation in congregational services has not kept up with overall population growth. However, religious groups drawing large numbers of immigrants have seen steady growth. 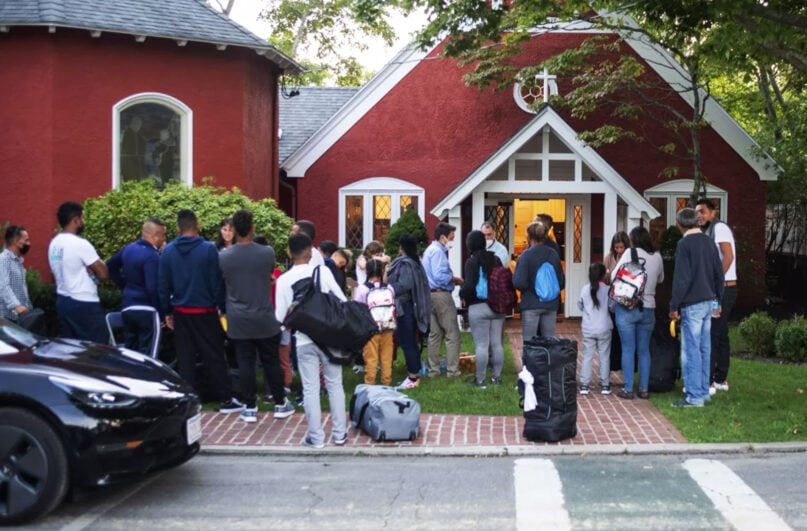 Immigrants gather with their belongings outside St. Andrew’s Episcopal Church, Sept. 14, 2022, in Edgartown, Massachusetts, on Martha’s Vineyard. Florida Gov. Ron DeSantis on Sept. 14 flew two planes of immigrants to Martha’s Vineyard, escalating a tactic by Republican governors to draw attention to what they consider to be the Biden administration’s failed border policies. (Ray Ewing/Vineyard Gazette via AP)

The U.S. Religion Census, conducted every 10 years by the Association of Statisticians of American Religious Bodies, concluded there were 356,739 religious congregations across the nation, and 161 million adherents, including children, in 2020. (Adherents is the formula researchers used to count those with an affiliation to a congregation, including children and people who attend but may not belong.)

Unlike polling, which asks questions from a small sample of the population and extrapolates to the general population, the religion census gathers information from denominations and other religious bodies and maps out the number of congregations and adherents on a county-wide basis. In the 2020 study, researchers collected data from 372 religious bodies, mostly denominations, but also 44,000 independent nondenominational churches. The count included synagogues, mosques and temples of Jewish, Muslim, Buddhist, Hindu, Sikh and Jain traditions. 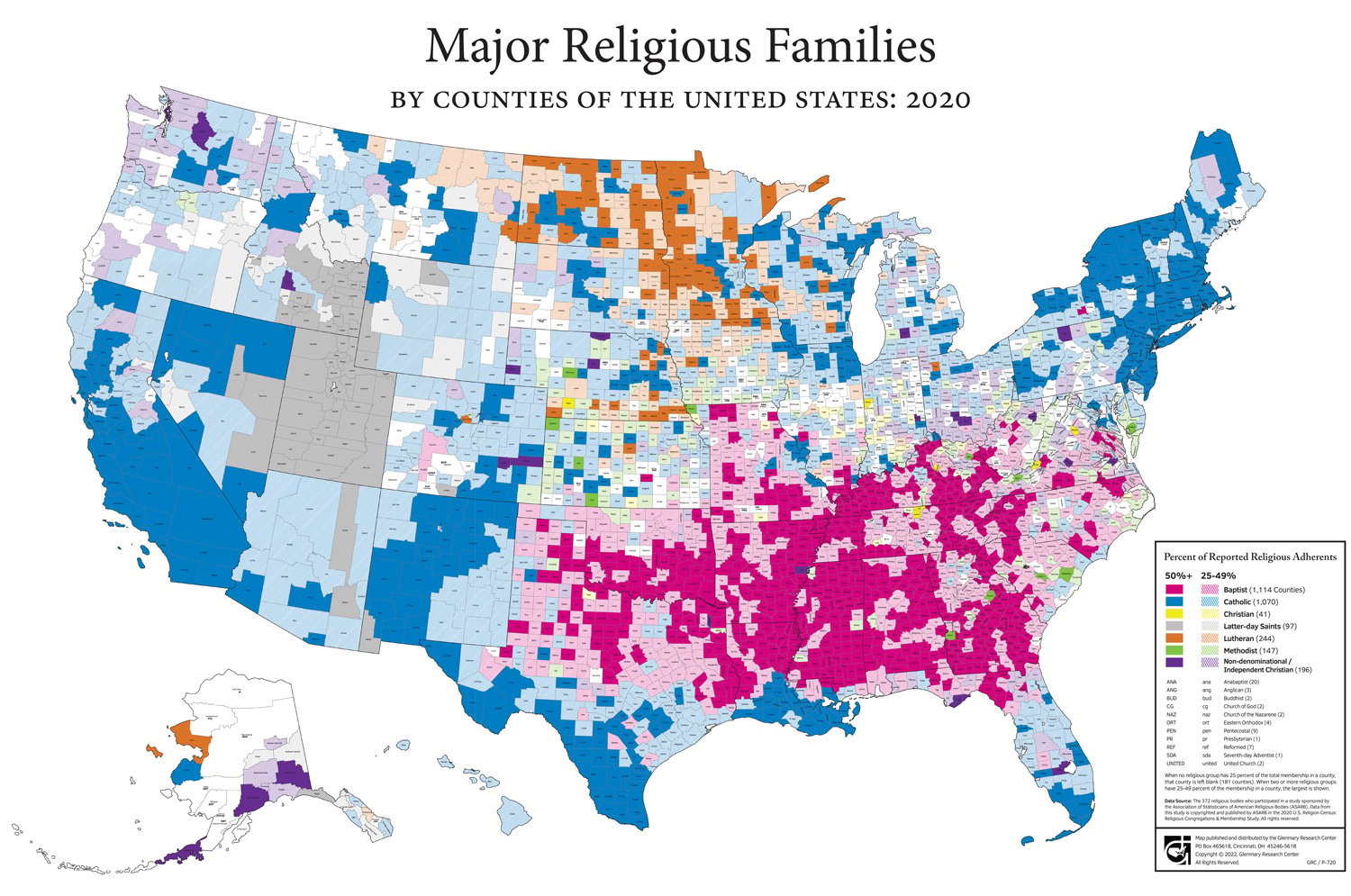 Sociologist who worked on the census said growth is almost entirely made up of Hispanic immigrants.

“If you took away the Hispanic population in the Catholic Church, it would look as bad as mainline denominations,” said Scott Thumma, director of the Hartford Institute for Religion Research, who counted independent churches for the census. (Mainline denominations, such as Episcopalian, Lutheran and Presbyterian, have been declining for more than 50 years.)

Perhaps the most striking growth was among Muslims. The number of Muslims who participate in mosque prayer increased from 2.6 million in 2010 to 4.5 million in 2020, a 75% increase. (Pew Research estimates there were 3.85 million Muslims in the U.S. in 2020, but those numbers do not include children.)

That growth is due mainly to immigration, said Ihsan Bagby, associate professor of Islamic Studies at the University of Kentucky, who collected the data for Muslims. Higher birth rates may be a secondary reason.

He suggested Muslims may be in a kind of golden age in the U.S. They are younger than the American population overall, and the Boomers among them are financially well off and able to contribute to the construction of new mosques. (First-generation mosques were often in retrofitted churches or warehouses.)

Mosques, Bagby said, “have mellowed and matured and become more moderate in their understanding of Islam and that has also been an attraction,” he said. “Many Muslims who had kept away feel more comfortable coming.” 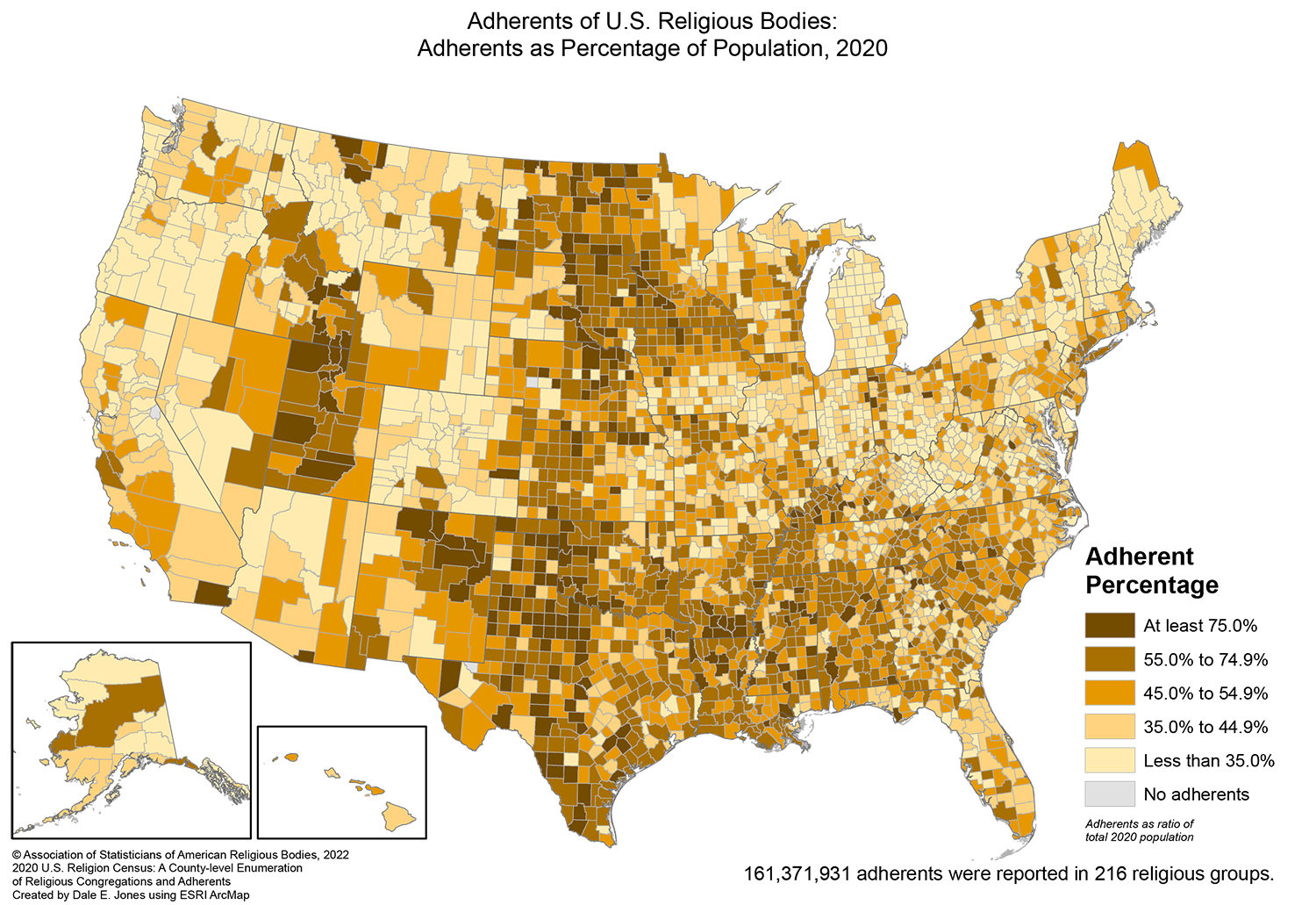 U.S. mosques, like those overseas, do not typically keep memberships. Bagby said he arrived at his estimates by asking for information on weekly Jumah prayers as well as holiday or Eid prayers. (Muslims make up about 2.8% of all religious adherents and about 1.3% of the total population, the study estimates.)

Much of the value of the census is its county-level aggregation, which corresponds to how researchers in other fields, such as population studies and public health, collect and analyze data, said Rich Houseal, secretary-treasurer of the sociological group that conducted the study.

Houseal said the data is also useful to businesses, too. Walmart, he said, has contacted him to help determine what books to stock in their stores based on the dominant religious group in a county.

Among other interesting data points in the study:

Southern Baptists have the most churches of any religious group: 51,379.

There are some 44,319 nondenominational churches, a jump of nearly 9,000 over 10 years ago, and about 9 million adherents. Still, overall, they account for only 13% of the total number of religious adherents in the U.S.

Southern Baptists and United Methodists each lost 2 million members from 2010 to 2020.

“Denominational brands have weakened, and divisions have increased over issues such as female clergy or sexual orientation, Thumma said. “This likely led some adherents to seek or even start new nondenominational churches.”