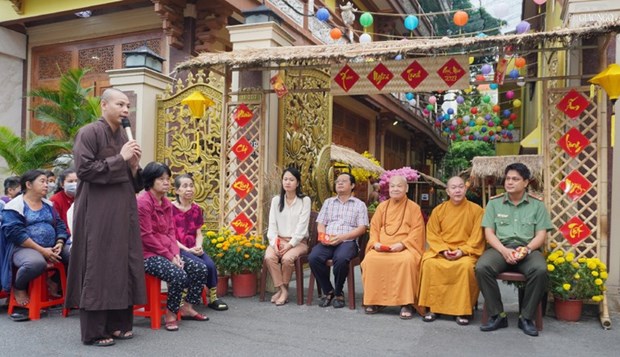 The fair, held from January 8-16, is expected to serve about 100-150 people per day. Apart of necessities and traditional goods for Tet, visitors will have a chance to receive an envelope of "lucky money" worth 200,000 VND.

Head of Minh Dao pagoda Venerable Thích Minh Ân said the pagoda will partner with other Buddhist monasteries in the city to join social and charity activities launched by the municipal Vietnam Fatherland Front, such as visiting and presenting gifts to needy people as well as holding traditional Tet celebrations.

It has become a tradition for Buddhist establishments in HCM City to organise charity activities to help needy people have a warm and sufficient Tet, which is the most important traditional celebration for Vietnamese in a year.

On January 5, the municipal VBS’s executive-charity board launched the programme “Xuan Yeu Thuong” (Spring of Love) and presented 1,200 Tet gifts to the disadvantaged in District 10.

Most recently on January 7, the VBS’s Cu Chi district chapter handed over gifts to 4,600 people in needy in the locality./.