International Buddhist conference to be held in Anuradhapura 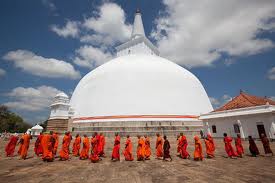 The Vice Chancellor of the Anuradhapura Buddhasravaka Bhikku University of Sri Lanka Ven. Professor Thumbulle Sri Sheelakkhanda Nayaka Thera told the Daily News that a multitude of programmes have been streamlined in every part of the Buddhist world in the wake of the 2600th anniversary of the Supreme Enlightenment of the Sakyamuni Buddha.

The Nayaka Thera said that around 125 classical and academical documented papers based on provable characteristics of Buddhism in various countries, the problems challenges being confronted by Buddhist monks and laymen in them would be submitted and exchanged during the three day conference.