Vietnam contributes to dialogue and co-operation in UNHRC’s activities

Ambassadors and heads of delegations applauded Vietnamese activities held at the 50th regular session of the UN Human Rights Council (UNHRC) as well as part of efforts and achievements in boosting socio-economic development and guaranteeing the rights of people in the nation. 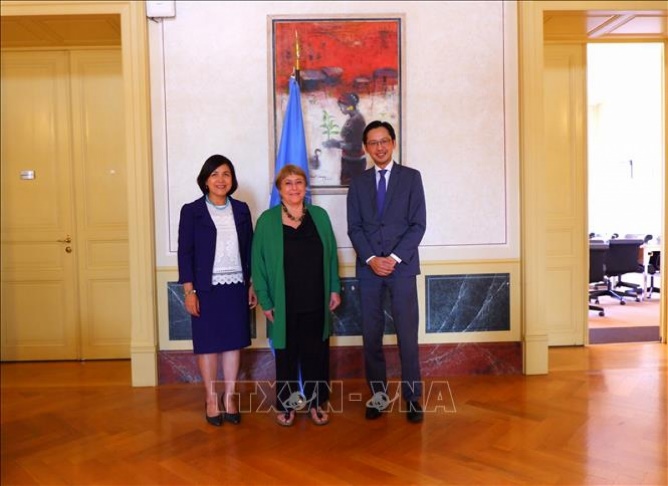 During the third working week from June 27 to July 1 of the 50th regular session of the UNHRC held at the UN Headquarters in Geneva, Switzerland, the Vietnamese delegation led by Assistant to Foreign Minister held a series of meetings. These took place between Michelle Bachelet, UN High Commissioner for Human Rights, Federico Villegas, president of the UN Human Rights Council, and Tatiana Valovaya, director general of the Đỗ Hùng Việt UN Office at Geneva.

The head of the Vietnamese delegation also met with more than 30 heads of delegations from other countries attending the meeting.

During the course of these discussions, the head of the Vietnamese delegation announced efforts and achievements in terms of socio-economic development, protection, and promotion of human rights in the country. This comes amid all nations globally attempting to recover from the pandemic, whilst simultaneously responding to global problems, especially climate change and the complicated developments of the recent world situation.

These efforts are reflected in the voluntary midterm report on the implementation of recommendations under the Universal Periodic Review of Human Rights (UPR) cycle III which was recently submitted to the UNHRC by Vietnam.

Introducing the 45-year journey of ties between the country and the UN, which began in 1977, Đỗ Hùng Việt affirmed that the country continues to support and will strive to contribute to enhancing the role of multilateral mechanisms. Indeed, these centre around the UN system in ramping up co-operation to solve global problems.

Vietnam successfully completed the term of non-permanent member of the UN Security Council for the 2020 to 2021 term with many initiatives, increased contributions to UN peacekeeping operations, whilst pioneering the reform of the UN development system.

The country is currently running as a member of the UN Security Council for the term 2023 to 2025 period with many commitments and priorities.

During an exchange with the head of the Vietnamese delegation, the director general of the UN Office at Geneva (UNOG) thanked and highly appreciated the recent interest and participation of Vietnamese senior leaders at international organizations in the UN system. He went on to affirm that UNOG will continue to support and accompany the nation in promoting activities introducing the country, its people, and potential for co-operation at international organizations in Geneva.

The UN High Commissioner for Human Rights hailed the socio-economic achievements which have created a foundation for improving the living standards and ensuring the rights of Vietnamese people in recent years, especially during the pandemic and moving into the post-pandemic recovery.

Bachelet shared Vietnamese priorities on gender equality, anti-discrimination, the protection of vulnerable groups from the impact of climate change, as expressed in her speeches at the UNSC. In addition, the UN High Commissioner added his hope that Vietnam would continue to ensure the full participation of people, mass organizations, NGOs, scholars, and development partners in policy and law formulation.

Furthermore, the president of the UNSC said that the nation’s candidacy message is the spirit that countries should pursue when participating in the UNSC.

With a range of diversity of political, economic, social, historical, cultural, and religious conditions, countries must respect each other and the common values of humanity, including international law and human rights.

Welcoming the Vietnamese candidacy message, the countries proposed that the nation jointly promote dialogue and co-operation ties with regional organisations at the UNSC. This should be done whilst linking the UNSC with specialised UN organisations, especially in the fields of health, labour, the environment, digital transformation. Besides, the countries also proposed new directions to promote bilateral relations with Vietnam.