The Vietnam Journal for Indian and Asian Studies under the Vietnam Academy of Social Sciences (VASS) and the Sri Lanka Embassy in Vietnam on December 29 launched a special edition of the journal themed “Sri Lanka - Vietnam Buddhist and Historical Relations” and organised a talk about the issue. 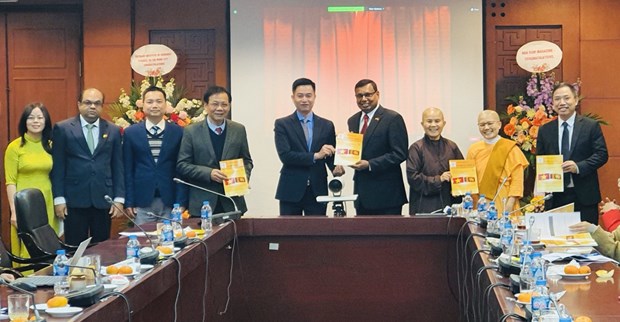 A special edition of the Vietnam Journal for Indian and Asian Studies themed “Sri Lanka - Vietnam Buddhist and Historical Relations” is launched on December 29. (Photo vjias.vn)

Speaking at the launching ceremony, Deputy Director of the Vietnam Institute of Indian and Southwest Asian Studies Phạm Cao Cường said that Vietnam and Sri Lanka are playing an increasingly important role in international relations in South Asia, South East Asia, and multilateral forums including the United Nations.

In the context of limited information about Sri Lanka in Vietnam, one of the useful ways to promote mutual understanding between the two countries is cooperation in publication, he said, adding that the special edition on Sri Lanka is intended to develop effective and practical bilateral relations between Vietnam and Sri Lanka.

The journal first published a special edition on Sri Lanka in 2021, providing information about the country and people.

Dr Thích Nữ Như Nguyệt, a Buddhist nun and Director of the Buddhist Women's Research Center under the Vietnam Institute of Buddhist Studies, said that Buddhist and historical relations between Vietnam and Sri Lanka are a very interesting topic as it is a prominent aspect of the relationship between the two countries.