A ceremony was held in the northern province of Tuyen Quang on September 3 night to receive a UNESCO certificate accrediting Practices of Then by Tay, Nung and Thai ethnic minority groups in Vietnam as an intangible cultural heritage of humanity. 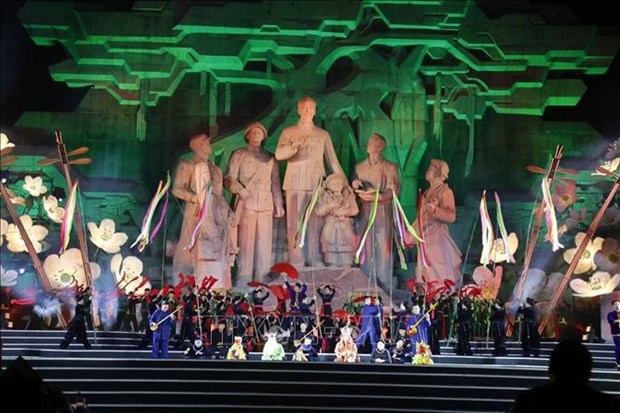 A performance staged at the ceremony. (Photo: VNA)

The practices were officially inscribed in the UNESCO Representative List of the Intangible Cultural Heritage of Humanity in 2019.

Addressing the ceremony, President Nguyễn Xuân Phúc affirmed the accreditation is a national brand that the world has reserved for Vietnam, thereby contributing to the introduction of special cultural heritages in the northern mountainous region to international friends and making this area more attractive to tourists.

It also helps ethnic communities in 11 localities housing the heritage understand more about Then’s value and come up with practical measures for its conservation and promotion in association with the growth of the tourism industry, the State leader said.

Highlighting the importance of preserving the heritage, he suggested the localities involved pay attention to building communications programmes, creating favourable conditions for Then artists to educate younger generations, and collecting and publishing related ancient documents.

According to UNESCO, Then, an essential ritual practice in the spiritual life of the Tay, Nung and Thai ethnic minority groups in Vietnam, reflects concepts about human beings, the natural world and the universe. Then ceremonies describe a journey in which the Then Master (male or female) controls ghost soldiers travelling from the earth realm to the heaven realm, to offer items of worship and present their prayers for peace, for treating illnesses, good crops, a happy new year, etc.

Then is always transmitted orally while its rituals are conducted, reflecting its succession between the generations, and Then Masters play a key role in passing on the related skills and know-how, with some conducting around 200 ceremonies a year./.