UNESCO has inscribed the art of pottery making of the Cham people on the List of the Intangible Cultural Heritage in Need of Urgent Safeguarding. 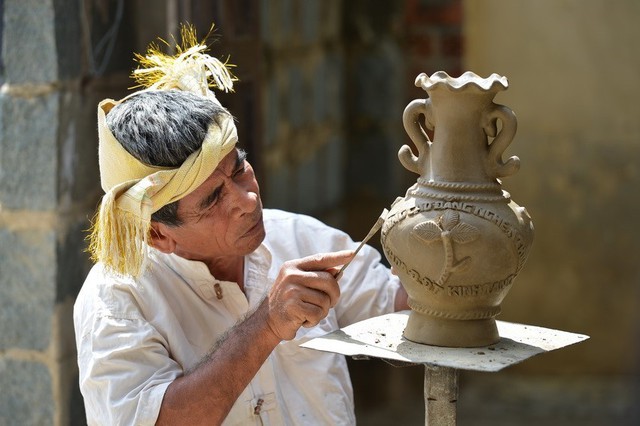 The decision was made at the 17th session of the Inter-governmental Committee for the Safeguarding of the Intangible Cultural Heritage in Rabat, Morocco, on November 29, according to the Ministry of Culture, Sports and Tourism.

It also helps the ethnic groups and communities in Ninh Thuan and Binh Thuan provinces to adopt practical and effective measures to preserve and promote the value of Cham pottery art.

According to UNESCO, Cham pottery products are mainly household utensils, religious objects and fine art works, including jars, pots, trays and vases. They are made by women and viewed as an expression of individual creativity based on the knowledge transmitted within the community.

The art of pottery making of the Cham people is Viet Nam's 15th intangible cultural heritage inscribed by UNESCO, and also the fourth UNESCO title Viet Nam has won this year.

Pottery making is considered a demonstration of Cham women's creativity on the basis of their community's knowledge.

Notably, instead of using turntables, Cham women move themselves backward around blocks of clay to shape objects. The products are not laid with enamel but dried and baked outdoor in wood and rice straw fires at about 800 degrees Celsius for seven - eight hours.

Clay is sourced from the Hamu Tanu Halan field on the banks of the Quao River in Bau Truc village and the clay pit of Xuan Quang village, about 3km to the northwest of Binh Duc village, the central province of Ninh Thuan.

Despite preservation efforts, the pottery making is still at risk of disintegration due to the urbanization process' impact on the access to raw materials, the slow adaptation to the market economy, and young people's lack of interest in the craft.