The joint project to restore My Son World Cultural Heritage Site in Quang Nam province is vivid evidence of the solidarity, friendship and effective cooperation between the Governments and peoples of Vietnam and India, stated Indian Deputy Ambassador to Vietnam Subhash P Gupta. 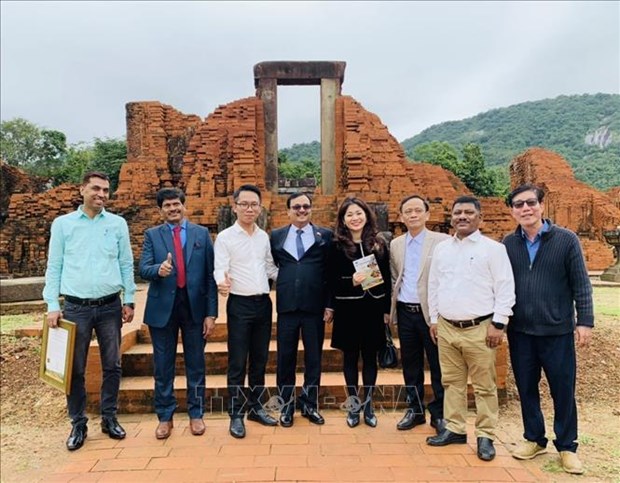 Speaking at a ceremony in the central province's Duy Xuyen district on December 20 to conclude and hand over the project, the diplomat said that the project generated good results with all contents completed.

Once the religious and political capital of the Champa Kingdom, My Son Sanctuary is located within a hilly landscape in Duy Phu commune of Duy Xuyen district, about 70km southwest of central Da Nang city and 40km from Hoi An ancient town of Quang Nam.

The temple complex, comprising of eight groups of 71 monuments built between the 7th and the 13th century, was recognised as a world cultural heritage site by UNESCO in 1999.

The project to restore the site focused on preserving the three tower groups of A, H and K. It was implemented over a duration of six years with the support of Indian experts.

Phan Hộ, Director of the Management Board of My Son World Cultural Heritage Site said that the restored towers have become attractive destinations for domestic and foreign tourists.

During the restoration process, 734 artifacts of all kinds were discovered, including unique artifacts of Champa sculpture, serving the exhibition and research of Cham cultural history. In particular, Indian and Vietnamese experts discovered an intact  sandstone altar with a set of monolithic Linga-Yoni. This is the largest monolithic Linga - Yoni set of Champa sculpture found so far, which is expected to be recognised as a national treasure.

Vice Chairman of the Quang Nam People’s Committee Trần Văn Tân said that the project has helped enhance the management capacity for local officials and workers.

The project, launched in 2017, has successfully deal with the downgraded situation of the site, thus completing the architectural space of My Son.