The strengthening of international solidarity and cooperation is key to addressing interlocking global challenges, affirmed Permanent Deputy Prime Minister Pham Binh Minh while addressing the general debate of the 77th Session of the United Nations (UN) General Assembly in New York on September 24. 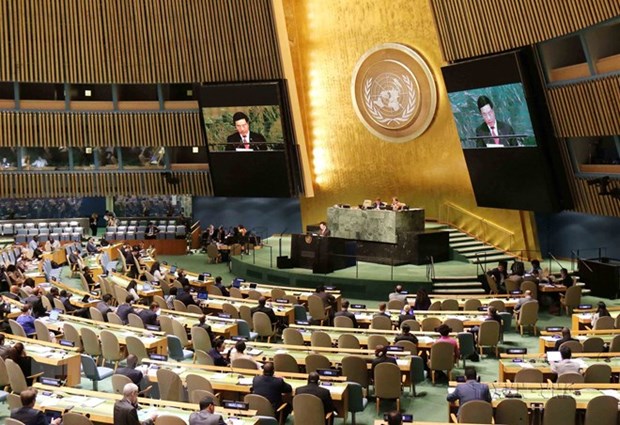 Minh underlined that the world is at a watershed moment in history as confrontation, conflicts and violations of international law continue to intensify, mirroring great power competition and unilateralism.

He pointed to a number of challenges facing the world, including COVID-19, climate change and many other non-traditional challenges, which have affected the implementation of the Sustainable Development Goals.

To reverse this course, it is crucial to fundamentally change the ways of thinking and doing things, he stated, stressing that this entails reshaping a global approach to address global issues, enhancing resilience and placing people at the core of all development efforts.

And key to such an approach is international solidarity and partnerships at all levels, he underscored.

"We know this from our own history. International solidarity has been crucial for the success of Vietnam's national liberation and reunification. Multilateralisation and diversification of partnerships, meanwhile, have proven indispensable in Vietnam's foreign policy of independence, self-reliance, peace, cooperation and development," he said.

He proposed that confrontational and zero-sum game approach must be eliminated. Vietnam called for strengthened multilateralism and international cooperation in the spirit of openness, inclusiveness, equality and mutual benefit.

All actions, both individually and collectively, must be guided by and in accordance with international law and the UN Charter, he said, highlighting the need for strong and effective multilateral institutions, with the UN at the heart, to best address global challenges.

Regional organisations can pioneer and play a prominent role in bolstering multilateral cooperation, he added.

He noted that in South East Asia, ASEAN is doing its part to help address regional and global issues. The association is working to build a strong and united ASEAN Community and advance the central role of ASEAN in the regional security architecture, he said. Minh also highlighted the ASEAN's efforts to seek comprehensive solutions to regional issues, including the situation in Myanmar.

Vietnam underlined the need for maintaining peace, stability, maritime safety and security in the East Sea, and called on all parties to resolve disputes by peaceful means, with full respect for legal and diplomatic processes.

"We call on parties to exercise self-restraint, refrain from unilateral activities and attempts to change the status quo, and not to threaten or use force, in accordance with international law including the UN Charter and the UN Convention on the Law of the Sea (UNCLOS) 1982," Minh said.

He quoted the President of the 32nd Session of the General Assembly while welcoming Vietnam to the UN 45 years ago as saying that the admission of Vietnam marks a further step towards consolidating peace and security in the world.

45 years on and these statements remain valid, he held. "We have consistently supported and pursued a balanced and constructive approach in seeking lasting solutions to global issues," he stated.

At the Human Rights Council, Vietnam has consistently worked to advance mutual understanding and respect, foster dialogue and cooperation. "We lead efforts to promote the rights of vulnerable groups in the context of climate change," he said.

As Vietnam is aspiring a seat at the Human Rights Council for the 2023-2025 term, the Deputy PM called for support from UN members during the run./.