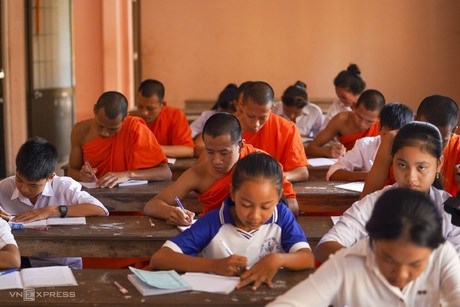 According to the newspaper, Giong Lon pagoda, which is over 300 years old, started holding classes more than 10 years. Around 100 students study at the school for three months a year. Books and notebooks are provided by the commune, district and provincial administrations.

The pagoda welcomes all people, regardless of religious orientations, including children as young as six. Monks from the neighboring provinces of Kien Giang and An Giang often travel there to broaden their knowledge.

Ong Met pagoda, 40 km away from Giong Lon pagoda, has a large and active community of people learning Khmer. It is one of Tra Vinh’s most well-known temples which was conferred national relic status in 2009. Many generations of monks at Khmer temples in Tra Vinh have been educated and trained there.

The article quoted Thach Oai, the abbot of the pagoda, as saying that teaching Khmer is essential for spreading policies to Khmer speakers.

In addition to classes at the temples, Tra Vinh province has a Pali-Khmer Intermediate school. To qualify for enrollment, students need to have completed a secondary education programme.