Buddhists carry out social activities worth over 500 million USD 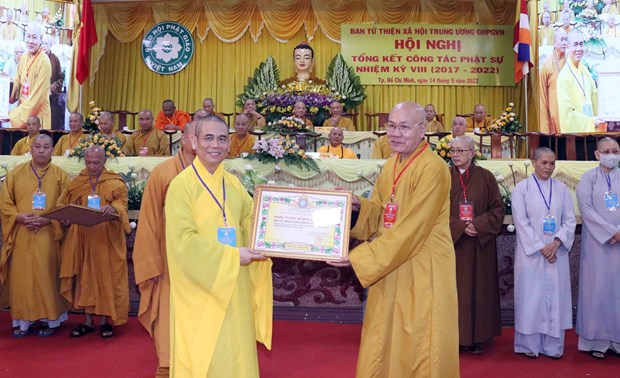 The board for charitable and social affairs of the VBS Central Committee presents certificates of merit to outstanding collectives and individuals in performing Buddhist tasks during 2017 - 2022. (Photo: VNA)

Most Venerable Thích Quảng Tùng, Vice President of the Executive Council of the VBS Central Committee and head of the board, said during the last tenure, the board has implemented an effective charitable programme to join hands with the State and local authorities in the COVID-19 combat, raise funds to assist disadvantaged people, and carry out social security activities.

Trà Quang Thanh, Director for the southern region’s religious affairs at the Government’s Committee for Religious Affairs, highly valued the board’s achievements and expressed his belief that it will build on the attainments to continue fulfilling Buddhist tasks and actively taking part in the VBS and the State’s social security activities, thereby contributing to the great national solidarity and the VBS’s development./.